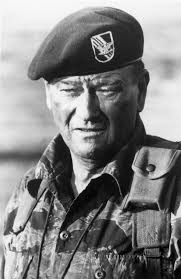 Hebrews 11 actually mentions several heroes of faith at this point.  About six in all by name.  I am only going to pick out three of them to finish out this sermon series because Christmas is coming up and I will be focusing on that with a short series of messages in December.  So at this point I want to deal with Gideon who was in a sense a soldier who rose up to fight for freedom.  I couldn’t very well do a series about Biblical characters related to film without putting in at least one John Wayne movie so I chose for Gideon the movie Green Berets.

Green Berets was released in 1968 during the height of the Vietnam War.  It was even at its time a controversial film because unlike many artists at the time John Wayne was a supporter of the military and he wanted to honor a group of military men in particular, namely the Green Berets.  The film’s plot involves the defense of base camp and the kidnap of a Northern Vietnamese general by the elite Green Berets.  The film highlighted the nature of special warfare at the time and in some respects brought some of the nature of special ops to the American public.  It was filmed at Fort Bragg where the Green Berets actually trained at the time so the realism of the film from a combat point of view was solid.  For my purposes, it highlights that there are soldiers and then there are those that are truly dedicated to the task of being soldiers.  There is the Army and then there is the Green Berets and Airborne Rangers, there is the Navy and then there are the Navy Seals.  There is always a group of soldiers that strives to be a smaller group of elite forces that a nation can count on to do the truly challenging work of war.

Gideon finds himself doing much the same thing in his fight against the Midianites.  Gideon to be honest is not someone I would have picked to be a leader of a military force.  When he is first seen he is hiding and grinding wheat at winepress so the enemy will not know he is doing it.  God calls him a mighty man of valor and he denies this.  He tears down his father’s altars to Baal and then hides so they won’t find him.  He questions his own judgment to the point of putting out a fleece twice.  The only thing that gives him any kind of courage is his faith in God.

When he finally gets his army together he had 33000 men facing an army so large the text says it was innumerable.  It is then God creates his own version of the Green Berets.  In some ways I find what God asks to be comical.  First he tells everyone who is afraid to go home.  23000 men check out leaving Gideon with only 10000 men.  God then trims the men down further on a simple test of how they drink water.  How they drink water!!!  This leaves 300 men for God’s special forces.  If I was Gideon I would be wondering if God wasn’t trying to set me up.  However, Gideon moves forward and with this small band of men he defeats the enemy force with trumpets and lamps.  The enemies of God are defeated by God and his people benefit for it.  Gideon goes on to completely routing the Midianites including killing their kings in their own homes.  God’s people are free because Gideon had faith in God to give him the victory.

The lessons of Gideon are that faith involves the need to have much the same attitude as a soldier.  To not care who gets the credit but the only factor that matters is victory.  Men and women in the special forces illustrate this so well as most of the time their work is not published in any book till much later and they do things simply with the desire to protect and serve people who are often ungrateful for their work.  Having faith involves this giving God the glory more than ourselves.  It also involves obedience despite the fact by doing so we might look ridiculous or to not be making sense.  Gideon trimming down his men given what he was facing demonstrates this.  Ultimately to have victory in our lives and situations means it has to be about God and being obedient to what he tells us to do, regardless of whether or not I makes sense to us.  We are his soldiers after all.